Ok - just three episodes remain and some writers on BSG forums have postulated an idea that is making more and more sense. So I think I've figured out how this series will end. This is ALL SPOILERS so if you aren't up with the latest episodes, stop reading NOW. But I believe the next three episodes will answer all the questions we've been waiting for from the entire series. Here are the big questions remaining:

1. How / why does Baltar communicate w/ 6 in his head if he's not a cylon? Why does this seem so similar to the "cylon projection" we saw between Boomer and Chief?

2. What is Starbuck's "special destiny"?

3. How did Starbuck survive the crash if she's not one of the thirteen cylons?

4. How did Starbuck know how to find Earth?

5. Why is the human/cylon hybrid child Hera so important to Cavil and the "hardcore" cylons?

6. Why does President Roslyn share the visions with 6 about Hera?

7. Where did resurrection technology original from, and how was it lost?

8. What was the cause of the destruction of Earth?

What we've learned so far about these questions:

1. On Friday night's episode we saw Starbuck playing piano with her father (or a memory of her father, at any rate). Her father was a composer who left her mother because she asked him to stop playing.

3. Baltar is still capable of imagining/having visions of 6.

5. The cylon models created by the final five have been infertle, and as Cavil has explained, feel existentially trapped between machine and human (except that Caprica Six and Tigh were able to have a child).

6. The 8 cylcon models created by the final five seem much more capable of deception and murder than do the final five, with the notable exception of Caprica Six and Athena.

7. The child Hera seems to intuitively know the same song that activated the final five on Gallactica.

So my theory, or the enhanced version of the theory others have proposed, is this:

Starbuck is the original cylon/human hybrid, born of Number 7 (Daniel) and Starbuck's mother, an army officer who died of cancer. Like Hera, the latest cylon/human child, her heritage has given her an intuitive understanding of the location of Earth.

Sensing that their cylon creations were about to turn on them, Ellen and the final five must have programmed some of the cylons (Daniel, possibly number 8 - Athena - and maybe 6?) with some kind of musical DNA that could be pass on to his heirs and that would re-call and re-activate the memory of the final five at some future time.

There may be other secrets programmed into the DNA, and perhaps Cavil wants Hera in order to plumb what else she might know and have stored, perhaps even as a way to achieve control over the final five.

As for the shared visions that 6 has with Roslyn and the projection she's capable of with Baltar, my theory is that the final five are really humans that were able to "crack" download technology and that the potential exists for cylon projection with all humans. In other words, a shared heritage that suggests there is little difference between cylons and human, other than who created them, or rather, the only difference is technology. As in all wars, the original war on Earth was over both the religious and technological differences over this technological advance.

And what of Baltar and his seeming cylon projection with 6? How was it possible that Baltar survived the initial blast on Caprica?

My theory: he didn't survive. He was, like Starbuck, resurrected. But unlike Starbuck, I don't think Baltar is a cylon-human half breed. I think he is a human who 6 decided to try to resurrect, using Ellen's technology. He is the first successful human resurrection - which is why he has visions of 6 (they were resurrected together) and also why Baltar believes in the one God like the cylons.

Then again, maybe not. In three more weeks, we'll find out what we'll find out.
Posted by Martin Schecter at 12:45 PM No comments:

Just got back from our annual Palm Springs trip. Did the usual things: stayed in Desert Hot Springs, relaxed in spa, hiked through canyons, visited our property. Had our ritual breakfast at Rock Garden Cafe before leaving town.
The house we stayed in was lovely - better than we had expected. Turned out to have three bedrooms and so we changed beds to feel like we were getting our money's worth.

The outdoor spa was the highlight, though. Didn't really need the pool - we'd warm up the spa each night and soak under the stars while we prepped dinner. Then we'd eat next to the outdoor fireplace.
Went on our usual hike through Palm Canyon - that's the canyon that gave Palm Springs its name. It winds behind the town between the hills, and a mountain spring creates a microclimate with cottonwood trees and Palms.

Also went hiking in Box Canyon, which is about fifteen miles east toward the town of Indio. You drive to the end of the desert cities, then cross the All American canal (which is a canal off the Colorado River that pumps water into the valley for date and orange farms), then head into the Mecca Hills, which are low, dirt-colored hills on the north side of the San Andreas fault. There was no-one there at all, it was eerily quiet, and with temperatures in the mid-sixties, it was a much more forgiving environment than it usually is in summer, when temperatures can reach 125. 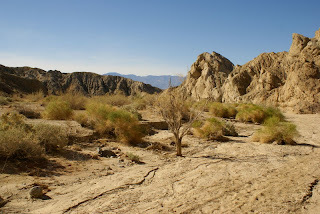 Of course, we also took lots of pictures of our lot in Desert Hot Springs, which you can see here.

Posted by Martin Schecter at 11:55 AM No comments: