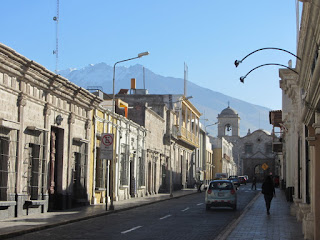 If you have the time, after your tour of Machu Picchu and the Sacred Valley, head to Arequipa, Peru's southern-most town and second largest city after Lima. This is the gateway to the Colca Canyon, one of the most beautiful natural areas in Peru. 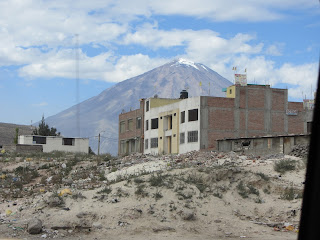 Arequipa itself is a fascinating snapshot of life in Peru: a mix of Spanish colonial architecture, modern high-tech startups (several Silicon Valley expatriates have set up shop), fashionable restaurants and shops in the center city, and extended mining operations and influx of impoverished campesinos who have moved to the outskits of town. 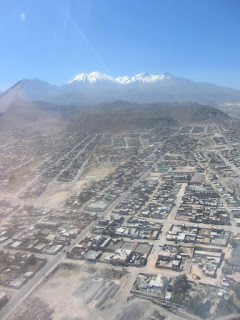 Its climate is that of Southern California, and so I felt immediately at home. As you fly over the mountains you will see tremendous canyons and ice-covered mountain tops: these eventually give way to dirt flats and a dusty wide plain. The city is built in this vast, desert plain, surrounded by active volcanoes. The city center was built by the Spanish out of the white mountain ash, or sillar, mined from the surrounding hills, giving the city center a ghostly, Catholic hue, while the more recent suburbs are corrugated metal and improvised brick. This situation gives Arequipa a kind of
desert-jazz feel, a fashionable heart surrounded by vast stretches of improvised dirt-and-cinder city blocks, and then surrounded once again by snow-capped mountains threatening to belch steam and ash every now and again.

Once you get into the city center from the airport, there is only one hotel to stay at: Casa Andina Private Collection. Again, the hotel can arrange a car to pick you up at the airport (however, have the concierge at your Cusco hotel arrange this for you right before you leave, since the arrangements come out better if done in Spanish). Be sure to book the full suite, which gets you into a traditional Spanish sillar alcove that you will not soon forget. (Otherwise you will end up in the very plain and ordinary main campus). This room alone -- off the center courtyard -- is fabulous enough to hang out in all evening with a bottle of wine from the hotel. The hotel is a short walk to the center of town, where you will find the town square, main church, many antique and alpaca stores, and top notch restaurants galore. 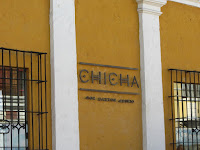 For a top place to dine, check out Chicha, right near the hotel, which will require reservations. There are several other good places recommended in the guide books as well.

While you are in Arequipa, the place to visit is Monestario de 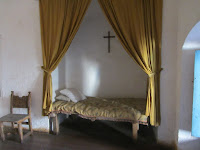 Santa Catalina, a converted nunnery that takes up an entire city block one street away from Casa Andina. It seems uninteresting from the outside, but this was an active monastery until the '50's and is a fascinating, baroque collection of streets, alcoves, churches, and gardens all contained within the unassuming walls of a city block. It's worth the price of admission to see the painted frescoes, walk the steps of the church for a 360 degree city view, and interesting photos of nun's lives preserved from another era. 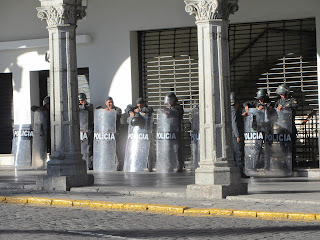 The other attraction is the main square, where you will interact with pushy tour guides (ignore them) and perhaps chance to see some of Peru's interesting politics, including the occasional strike or two. Those of you who want the background on such things: its agriculture versus mining, the two industries at war for the resources around Arequipa.

While this isn't nearly the jam-packed tourist attraction magnate that you will find in the Sacred Valley, Arequipa gives you a chance to relax and feel like you are in a genuine foreign city. Spending time simply wandering the streets or sipping cocktails in one of the rooftop bars will make you feel like you've gotten to see the real life of Peru. But don't forget the real reason you are here: to book one of the many tours to see the wonders of the Colca Valley. 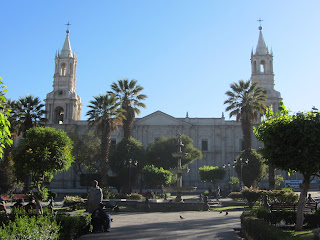 If you want to do this in advance, I recommend an outfit like Giardino Tours. They will be happy to arrange a two or three day excursion if you like. It will cost about $300, without hotel, if you want a private tour (which I recommend, as you can set your own itinerary). Bring your Spanish phrase book - the drivers don't speak English, and you will want to coordinate times and stops in advance if your Spanish is non-existent. Also bring crisp and clean US dollars (not old or bent) to pay the driver, since they don't take money if it's worn, along with plenty of Soles (which you will need for the restaurants and vendors along the journey).

The driver will pick you up at Casa Andina at the appointed time - then return you to the hotel two or three days later, if you like (unless you prefer to go on to some place like Puno). The excursion is the real reason you came to Arequipa, but don't overlook the charms of this fascinating city itself.

Posted by Martin Schecter at 7:55 AM