Touring Cusco: A Great Way to Finish the Inca Valley Tour of Peru 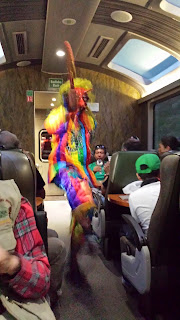 If you are following my advice on itinerary, Cusco is your last stop in the Sacred Valley after touring Machu Picchu. Book tickets for the four-hour train ride from Machu Picchu pueblo to Cusco in advance, then arrange for your hotel in Cusco to meet you with a driver at Poroy Station on the outskirts of the town (typically the driver will cost about $24, the price of a New York City cab ride); it takes a good twenty minutes more for the drive into Cusco proper.

The four-hour journey from Machu Picchu to Poroy takes you from afternoon into night time as the
train chugs its way uphill to the elevations of Cusco. Be prepared for some local entertainment or what they call a "floor show," where the train attendants dress in local traditional garb, then try on  Alpaca clothing with the intention of getting you to buy. If you ignore the tackiness of the high-pressure sales tactics it's an entertaining ride.

There are numerous five-star hotels in Cusco to chose from, all situated near down-town attractions. We stayed at Palacio del Inka, a Starwood hotel built in Pissaro's old mansion, across from the not-to-be-missed attraction of Koricancha, a Spanish church built atop the original Incan temple that formed the center of worship in this capital of the Incas. Another popular hotel choice is the JW Marriott, a bit closer to the main square downtown. Belmond Palacio Nazarenes is the place to go if you want to splurge. 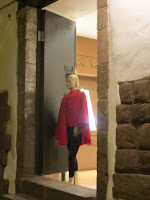 Cusco is a fully stocked, cosmopolitan town where you will be able to sample cuisine from some of the top restaurants in the world, shop for Alpaca knits from both high-end boutique designers (who don't bargain) and tucked-away malls featuring locals hawking wares for negotiated deals (walk away at least twice before settling on a price, and start at less than half the ask). There are also great attractions and museums. 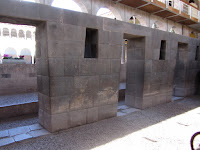 In addition to touring the town square at the center of town, Koricancha is the attraction to see. Here, an earthquake in 1950 revealed the grand Inca temple hidden under the church. The Inca's had gilded the walls of the
temple with gold, which was all spirited away by Pissaro's men. Now, it's a museum, and you'll find exhibits from famous Peruvian artists in addition to stone temple walls and Spanish religious paintings.

The other museum that is not to be missed is Museo de Arte Precolombino (also known as MAP). The small museum contains artifacts
from all eras of Peruvian civilization. It contains pottery, metal, glass, and other arts from prehistory to Inca times, and gives you a strong sense of how warring tribes subdued the more refined sensibilities of the Nazca and South American art evolved. The museum itself is an enchanting piece of Spanish architecture in one of the prettier squares hidden away in Cusco.

As long as you are touring MAP, make a dinner reservation at MAP Cafe for one of the top dining experiences in Peru. This may well be the best, most unique and romantic meal you have the entire trip. 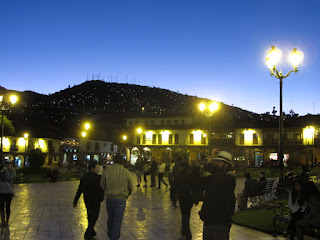 All the tour books tell you that Saqsaywaman (often jokingly pronounced "Sexy Woman" by the locals, and the source of all those Sexy Woman cocktails in the hotels), on the north side of Cusco overlooking the town, with its monumental stone structures, is the Inca ruin second only to Machu Picchu. We didn't make it - after five days of Inca ruin touring, you may rather sample the more cosmopolitan charms of a full-fledged city like Cusco. Don't feel you have to haul yourself over just because it's there; there's plenty enough good restaurants and shopping in Cusco to keep you busy for a day and a half, until you're ready for the next leg of your trip. And after five-days of sweaty hiking, the same-day laundry service, cool museums, hip art galleries, and numerous world-class restaurants available in Cusco proper may be just the thing you crave.

Next - if you planned your itinerary as we did - it's off to someplace new, like Arequipa and the natural wonders of the Colca Canyon.


Posted by Martin Schecter at 5:04 AM